Pebble is a jam-rock band based in New York's Southern Finger Lakes Region. Pebble plays their own original music, weaving singer-songwriter stories through funky grooves, four-part harmonies and deep-space psychedelia, with plenty of musical improvisation to gel them together.

Formed by guitarist/songwriter Ben Borkowski and drummer Brent Clark from the band "Ben Borkowski & Friends," the welcomed addition of Andy Knapp and Tim O'Brien helped to materialize the sonic vision of his repertoire. Each of them bring differing outside influences to their playing styles, adding an outward extension to the core of the music, together meandering in and out of melodies, song structures, and long musical tangents. 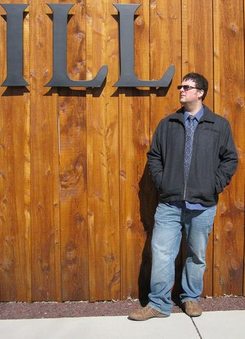 Ben Borkowski has been playing guitar for over 20 years. He began writing music as early as middle school, winning 1st place in a national songwriting competition with his rock trio band during high school. Ben is also a hand drum enthusiast, leading the University at Buffalo's drum circle, Namaste, while attending the college. These world rhythms come through in Ben's unique rhythmic style of playing. This "melodic drumming" strumming technique puts the focus of the song on rhythm. Once called a "hippie crooner," Ben sings soulful, upbeat music to keep his audience's feet tapping.

After a few years of playing solo acoustic gigs, Ben began his own Band, "Ben Borkowski & Friends" in 2003. Having various rotating accompanists through the years, he met Brent Clark, who began playing with him in 2009. Having hosted open mic nights for years, Ben is comfortable in a solo-acoustic setting, but loves most playing with his current band, pebble.

After childhood piano lessons and a year of violin in elementary school, Tim O'Brien took up trumpet in 5th grade, which became the catalyst for him to begin learning a diverse array of music. In high school, Tim began learning guitar by ear and also started writing songs almost right away. He has contributed his trumpet to recordings by electronic artists Basic Printer and exitpost, been a driving force as a co-writer, trumpet/guitar player and backup vocalist for the jazz/funk/fusion band Murj and led the progressive rock band Karmascend as a frontman and guitarist. Tim currently writes and releases music under the solo moniker "Time's Quiver" which explores numerous genres of songwriting and recording all parts himself. He also has a drone/ambient solo project called Absence of Evidence which explores the atmospheric side of music. In 2017, Ben summoned Tim out of the studio to play trumpet or cajon with Ben Borkowski and Friends, and then recruited him to be the bassist for Pebble. 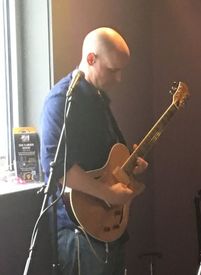 Andy Knapp is a guitarist and songwriter from Upstate New York. He travels frequently and enjoys absorbing new sounds from different cultures. As a child, he received classical piano training. His first live band appearance was in the very early 2000s, during which, in true rock star fashion, he threw his puka shell necklace to an audience member, who then threw it back at him.

Andy performs for audiences of all ages in the Southern Tier, and has spent the last couple of years playing mandolin in bluegrass and folk rock bands in the Ithaca area. He has always been attracted to the jam genre and exploratory music, and is happy to have found three other interested and interesting musicians in this realm to collaborate with.
Powered by